I received the following message from SEA via Scott Murray: "Recently there have been a few undocumented reports of poor or "emaciated" black drum showing up again in the Upper Laguna and Baffin. As many of you know, there are several studies planned and on going in Baffin."

The Black Drum is one of my favorite fish to catch and haven't personally seen the "skinny black drums". It"s worth noting and passing along photo's to your favorite game warden if you happen to catch skinny one.

There is a great report published this last April 1st, 2013 by the TPWD about the "Emaciated Black Drum". Their report basically says it is limited to the Baffin Bay area. It was thought that last summer (2012) Brown Tide was causing this emaciation, but their recent report said that the Brown Tide cause was more negligible and overridden with other factors. The good news is that the population is growing.

They compared black drum from Baffin bay and fish caught around the JFK bridge and found on average that the Black drum in Baffin Bay were under weight by 15%. There salinity trends seem to be inconclusive and further study needed to learn about the food supply.

This year JustGoFishin.com had the pleasure of sponsoring Captain John Little and his family to fish this years Sharkathon. This tournament sold out with 400 entries in only about 30 minutes. The 3 day event was quite a contest with hundreds of anglers lined up along the Padre Island National Seashore (PINS) going for a chance for to win cash prizes. 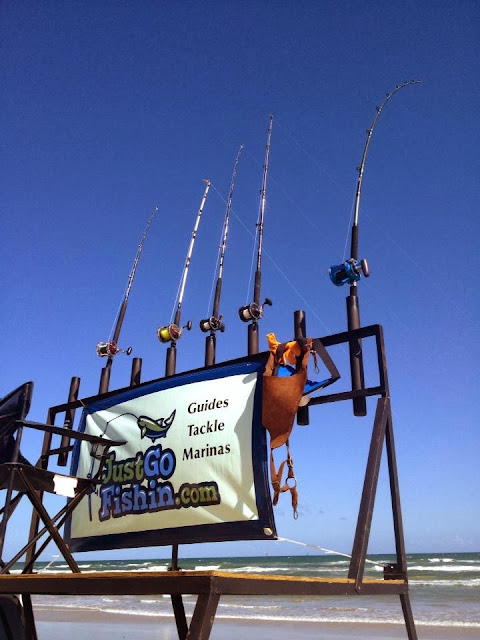 No sharks for the team this year. However, their daughter Morgan caught a nice redfish to get 4th place in the kids division for the weekend.
Posted by Patti & Dave Alexander No comments: