Instrument Navigation to the Land Cut 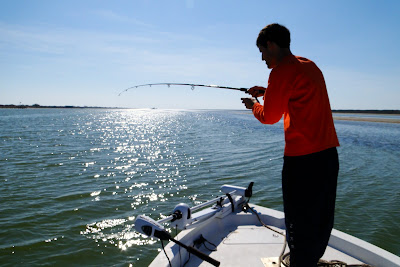 December has been a difficult month for fishing due to several Northern fronts moving into our area and making it difficult for the fair weather fishermen [me]. Yesterday morning on the 30th of December we had a window of opportunity to take a trip to the Land Cut for some fishing. Stopped by Clems Marina for some bait and learned that live shrimp was not available anywhere. So we picked up some live mullet and dead shrimp for the trip. Weather forecast said the morning fog would be burned off by 8:00am with south winds.

Mark, Charlie and I headed south about 7:30 in the morning only to find visibility to be about 20 to 30 feet ahead. Our GPS came in handy and aloud me to navigate by instrument and watching for the markers on the ICW. Cruising at about 30 mph I was able to determine approximately when I would see the next marker by using our GPS. As we got closer to Baffin Bay the fog became even thicker and visibility became more like about 10 feet in-front of us which forced me to reduce speed to 10 mph and losing my boat plain. Finally after getting close to rocky slough the fog became thinner and visibility aloud me to crank the boat up to about 40 mph. As we finally made it to our fishing spot at about 9:50am which made our boat ride almost 2 1/2 hours.

The fishing wasn't happening this day. The winds were coming out of the south which scatters the bait fish at the cut and the fish just were not biting. We moved around with similar results only catching a few under sized redfish.

Finally the wind gave us a break about 3:00 in the afternoon and shifted to Southeast winds. Just like clock work the fish were biting and we started to catch fish almost on every cast. And we caught about everything; redfish, black drum, speckled trout, and flounder all mostly on dead shrimp. They were all just under sized.

We had to pull up anchor and head back home while we still had daylight and left the Land Cut at 4:15pm. We made it home right at sunset. The day was a nice adventure using instrument navigation through the fog as the day turned into a sunny blue sky. Hm, Hm, Hm.