I would like to preface this fishing story of a lifetime with a little bit of background information to help the reader better understand the root of my family’s excitement. My name is Ty Howard. I live in Richmond, Texas and am a Police Officer with Fort Bend ISD. My wife Brooke also works for the school district as a fifth grade teacher. I have two beautiful girls from a previous marriage, Courtney age 10, and Chloe age 8 who really enjoy camping and fishing with us. Brooke and I have an 11 month old son who we named none other than Fisher Howard. We share the love of kayak fishing all along the Texas coast and she holds the State record for catch and release redfish at 51” from her kayak! The personalized CCA license plates on my truck say “KYAKR”. I guess you could say that we are addicted to fishing in a big way.
For years we have entered the STAR tournament and had a discussion almost every time on the way or way home about what we would do if we were ever lucky enough to catch a tagged redfish. It seems that we are a blessed and lucky couple. Brooke won the showcase on The Price is Right five years ago and it seems like good things come our way often. After this weekend I am thinking that we are definitely the luckiest two people on earth. Now, on to the fishing story.
Man...what a weekend!!!

On Saturday June 13th the Third Coast Kayak Tournament day began at 5:00 am and it was business as usual... gas station coffee, powdered do-nuts, 2 Slim Jim beef sticks for a mid-day snack, and a Gatorade. We went to tournament headquarters and picked up our rulers and off we went.

As we arrived at The Fishing Center in Port O'Connor there were several other kayakers ready for launch and tons of boats screaming out of the marina. Myself, along with my two friends Tom and Kevin got unloaded and rigged up as we waited for safe light to paddle across the ICW to the flats. Soon after the first group of kayakers made it to the other side we headed out. Paddling across to the fishing area, the usual thoughts were racing through my head as with tournament morning. High hopes of getting into a school of good sized redfish and maybe even a big trout had me so excited. If I had only known what this day would bring!!!!

I was able to find some nice reds early on in the morning. I found a small school and anchored up with my Stakeout Stick. My first was a little guy about 15" long followed by a 21" and 22". It looked very promising but the bite turned off for me about 8:00 and by 10:30 I felt it was time to move out of the area. I called the other guys telling them that I was paddling down the ICW towards the jetties. I had caught several trout there the day before and I really needed one to go with my red for a stringer. By the time that I got to the jetty it was hot...REALLY hot!!! I fished for about an hour with nothing to show for it and by that time Kevin had made it out there with me. We agreed about 11:45 that it was time to paddle back to The Fishing Center. I figured that I had put enough miles on my Ultimate 14.5 for the day so I called my wife Brooke and told her that we would be headed back to the R/V park shortly.

We began to paddle back in and Kevin said that we should try working some of the structure along the ICW. There were grass banks, bulkheads, docks, and rock structures scattered throughout the length of the paddle in. We worked it most of the way back without a bite. Soon, we came upon a restaurant where some friends were having lunch overlooking the ICW. They saw us paddling up and jokingly said "there are no redfish around here". I replied “no kidding”. We had a good laugh and began to paddle on.

With a short distance between me and the launch spot, I put on a fresh Gulp jerk shad in pink and white. I noticed a rock pile just out from the bulkhead about two houses down from The Fishing Center. The cast found the edge of the rocks and the Gulp sank slowly in the shaded, clear water. While on the fall I noticed that a fish had picked it up so I set the hook. After a couple of cranks a redfish tail came out of the water. By the way the fish was fighting and the size of the tail, I knew it was not a big fish so I did not get overly excited. I gave the fish a couple more cranks and reached for my net. While raising my rod with one hand and starting towards the water with the net in my other, the fish's back surfaced. Nothing could have prepared me for what I saw next. There was a bright red tag sticking out of the middle of the fish's back. Luckily, he swam into the net on the first try. As I lifted the net out of the water and lowered it into the floor of my kayak. I realized that in the past 10 seconds I had actually caught a tagged redfish. 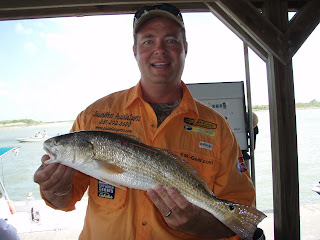 I folded the net over double and shoved it up under the bow skirt on my Ultimate kayak. I had about a 50 yard paddle to the boat ramp where there were a crowd of boats loading and unloading. I made it to the ramp and pulled my kayak up on dry land. There were a few people standing around and they could obviously see the excitement on my face. I stood up and looked down into my kayak. There was a TAGGED REDFISH with the hook still in his mouth flopping around. I looked at a couple of the folks standing there at my kayak and said "look what I just caught"!!! They were about as surprised as I was.

I quickly cut the line and put the fish in the cooler section of my kayak cooler bag. Soon, a lady that works at The Fishing Center came out and said "who caught the tagged redfish". I raised my hand with a huge grin and said "ME". She said that they are a CCA weigh station and she was very helpful getting all of the appropriate paperwork done and the fish logged and weighed.

Meanwhile there were crowds of people around inside the marina and I was trying to call Brooke (and everyone else I know) to tell her the amazing news. Kevin's wife Kathy called back on his phone b/c she and Brooke were swimming at the pool in the r/v park. I said "let me talk to Brooke". Here is how the phone call went...

This wild and loud display continued for a few minutes while I was grinning, listening to her yell at the top of her voice. 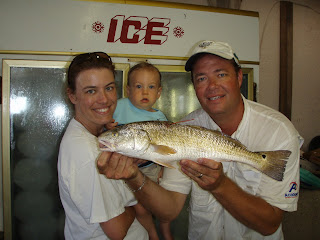 After all paperwork was done, we snapped a few photos and The Fishing Center retained the fish for CCA. At this point in the tournament, there are 3 confirmed redfish winners and 3 more pending polygraph. That would make me number 7 meaning that I am in line for a 23 ft. Haynie Bigfoot bay boat with a Mercury 150 EFI motor. A sweet prize for the fish of a lifetime!!!!!!